We present a case of a patient with a radiological diagnosis of gliomatosis cerebri whose clinical presentation mimicked that of viral encephalitis. A 69-year-old female presented with a few days history of confusion, headache and fever. Examination revealed mild extensor weakness in the left upper and lower limb. CSF showed a mild pleocytosis; gram stain, bacterial and viral cultures as well as HSV PCR were negative. CT brain showed diffuse right hemispheric oedema with a focal enhancement in the temporal lobe, which was also demonstrated on MRI brain. Aciclovir and dexamethasone were started for presumed viral encephalitis. After 8 days of treatment, the patient's symptoms improved and she was discharged. One week later, the patient was more confused with new left sided hemianopia. Repeat MRI brain revealed progression of the diffuse right-sided oedema, extending into the corpus callosum and cerebellum. Following discussion with a specialist neurooncology centre, we were advised that the images were indicative of extensive Gliomatosis Cerebri. Unfortunately, the patient died of pneumonia before tissue diagnosis was obtained. GC is a rare form of infiltrative glioma involving three or more lobes of the CNS. It has a varying clinical presentation and there are frequent case reports of GC mimicking alternative diagnoses. GC has been reported to mimic viral encephalitis in only one previous adult case.

Gliomatosis Cerebri is a rare form of infiltrative glioma involving three or more lobes of the central nervous system. It has recently been deleted from the 2016 CNS WHO classification as a distinct entity however it is now considered a special pattern of spread within the diffuse glioma subtypes [1]. With variable clinical presentation, it is often difficult to diagnose and as such, worthy of discussion. We describe a recent case of a 69-year-old female with a radiological diagnosis of Gliomatosis Cereberi whose initial clinical presentation mimicked that of Viral Encephalitis.

A 69-year-old female presented to the Acute Medical Unit with a few days history of confusion, mild headache and low-grade fever. Retrospectively, the patient’s husband reported subtle personality changes in the preceding two months prior to admission. She had no significant past medical history and was previously independent living at home with her husband. Initial examination revealed mild extensor weakness in the left upper and lower limb with mildly increased tone. Abbreviated mental test score was 6/10.

Initial routine laboratory tests revealed a raised white blood cell count of 15,200/mm3 with a neutrophil count of 14,400/mm3 and C-reactive protein level was 0.7mg/dl. The cerebrospinal fluid obtained on admission revealed a mild pleocytosis with a white blood cell count of 16 cells/cmm (20% polymorphs and 80% lymphocytes). Protein content of the CSF was normal, and glucose levels were not tested. CSF gram stain, bacterial and viral cultures as well as HSV PCR were negative. 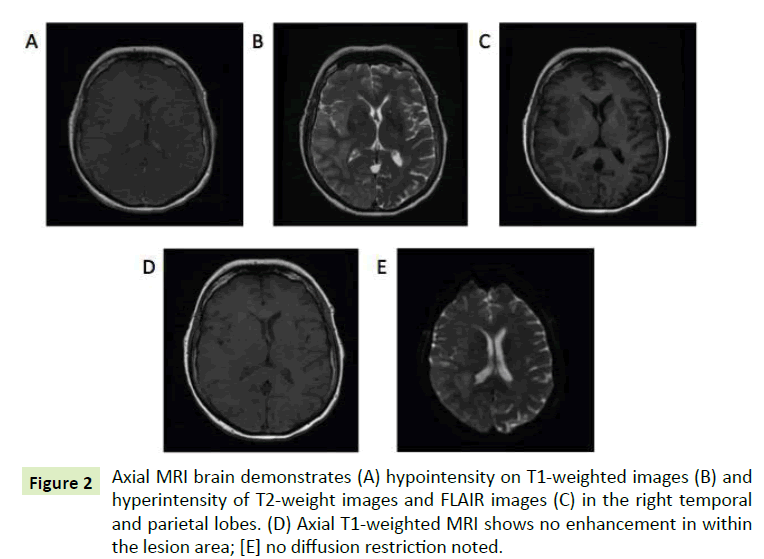 Figure 2: Axial MRI brain demonstrates (A) hypointensity on T1-weighted images (B) and hyperintensity of T2-weight images and FLAIR images (C) in the right temporal and parietal lobes. (D) Axial T1-weighted MRI shows no enhancement in within the lesion area; [E] no diffusion restriction noted.

Despite the initial CSF viral screen being negative the patient was started on intravenous acyclovir due to the high risk of mortality (70%) of encephalitis if left untreated [2]. Corticosteroids were given to aid with reducing vasogenic cerebral oedema [4]. After eight days of initial therapy, the patient’s symptoms improved somewhat and she was discharged with follow up in Ambulatory care clinic.

Upon review of the patient one week later, her symptoms had worsened and she was more confused with new left sided homonymous hemianopia. Repeat MRI revealed progression of the diffuse right-sided cortical, subcortical and limbic oedema, now involving the splenium of the corpus callosum and right cerebellum. Other differential diagnoses considered at this point included antibody-mediated encephalitis however voltagegated potassium channel complex protein antibodies and NMDA receptor antibodies were negative.

Images were shared with a specialist neuro-oncology centre, who advised that the imaging was highly suggestive of extensive Gliomatosis Cerebri. Unfortunately the patient died of aspiration pneumonia before tissue diagnosis was obtained.

Gliomatosis cerberi has been deleted from the 2016 CNS WHO classification as a distinct entity, however it remains to be considered as a specific growth pattern found in many gliomas [1]. Features suggestive of this growth pattern include widespread brain infiltration involving three or more cerebral lobes, bilateral growth and extension to infratentorial structures [5].

Upon review of the literature, there are frequent reports of GC mimicking alternative diagnoses. There is one adult and three paediatric case reports of gliomatosis cerebri mimicking viral encephalitis [7-10]. Other reported cases where GC was initially misdiagnosed include Chronic Meningitis, TIA, Parkinsonism, Dementia and Idiopathic Intracranial Hypertension. This highlights the point that GC is difficult to diagnose due to its vague and varying signs and symptoms, which often leads to a delay in treatment.

In the case we describe, there was an initial improvement in the patient’s symptoms when IV acyclovir was commenced. This led to an assumption that Viral Encephalitis was the correct diagnosis. However, upon reflection, this was most likely due to concurrent use of high dose dexamethasone, which was started in view of reducing cerebral oedema.

Guidelines suggest that CSF PCR for HSV between day 2 and 10 has an overall sensitivity and specificity of >95% for HSV encephalitis. If negative in the first few days, a second CSF should be taken 2-7 days later and will usually be HSV positive even if acyclovir has been started [2]. If we had repeated the LP and received a second negative result for PCR HSV, this could have given us an earlier indication that we did not have the correct diagnosis during the patient’s first hospital admission.

Unfortunately the prognosis of GC is poor and the delay in diagnosis was unlikely to have been significant for our patient. However, the case highlights the importance of involving specialist opinion early on as other differentials relevant to this case including antibody mediated encephalitis favour an early diagnosis for a better outcome.

• It is rare and may initially mimic alternate diagnoses

• It is important to repeat HSV PCR if suspecting viral encephalitis and initial testing is negative, as even if on treatment, repeat HSV PCR should be positive if repeated in 48-72 hours.