Botulinum toxin type A (BTX-A) is now widely used for movement disorders, pain disorders, and autonomic dysfunction. One of the characteristics of BTX-A is a minimal effect at short distances from injection site; however, local diffusion could cause paralytic effect in muscles adjacent to the target [1]. On the other hand, BTX-A was suggested to cause peripheral neuropathy [2]. In this article, we describe a case of left hemifacial spasm (HFS) followed by ipsilateral facial nerve palsy after BTX-A injection.

A 59-year-old woman developed left HFS at the age of 55. She was treated with carbamazepine which showed no therapeutic effects. We started botulinum toxin therapy for HFS when she was 58 years old. Prior to the botulinum toxin therapy, we ruled out myasthenic syndrome with electrophysiological study. Brain MR imaging showed tortuous left vertebral artery; however, we did not observe tumor, vascular malformation, and aneurysm. BTX-A (BotoxR; Allergan, Irvine, CA) was diluted 1.25 units per 0.1ml of 0.9% saline. We injected BTX-A into orbicularis oculi, zygomaticus major, and orbicularis oris in five times. Each treatment was followed by disappearance of HFS without any adverse events. On sixth treatment, we injected 6.25 units of BTX-A into left orbicularis oculi (1.25 units per site, 3 sites), zygomaticus major (1.25 units per site, 1 site), and orbicularis oris (1.25 units per site, 1 site). There were no immediate adverse reactions after injection and facial spasm disappeared on the next day; however, five days after this treatment, she noticed the weakness of left facial muscles without preceding infectious symptoms and vaccination.

Frontal muscle and platysma, which we did not inject BTX-A, were also weak. Bell phenomenon, ciliary sign, and platysma sign were positive. We observed no rash around left ear. In electrophysiological study of left facial nerve, stimulated below ear and put pick up electrode at nasalis, the amplitude of the compound muscle action potential fell off remarkably in comparison with that of the right side (Figure 1). Brain MR imaging showed only tortuous left vertebral artery. Routine laboratory testing including antibodies of herpes simplex virus, varicella zoster virus, Epstein-Barr virus, and cytomegalovirus, did not show significant abnormalities. Antiganglioside antibodies were negative. Cerebrospinal fluid revealed neither pleocytosis nor hyperproteinorrachia. We diagnosed her as left peripheral facial nerve palsy and administered prednisolone and mecobalamin. Facial spasm relapsed after 24 weeks; however, facial nerve palsy improved without any sequelae. 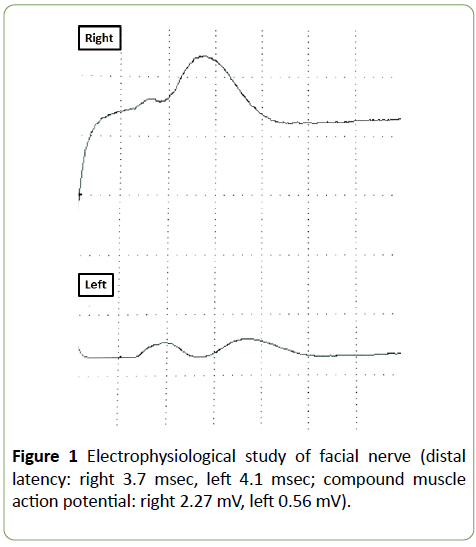 Several cases of polyradiculoneuritis and brachial plexopathy after BTX-A injection have been reported to date [3-9] (Table 1). Compared with these cases, we had to rule out the infiltration of BTX-A because weakness occurred in muscles into which they were injected BTX-A and their adjacent muscles. Thorough neurological examination and electrophysiological study were useful for distinguishing facial nerve palsy from BTX-A related facial muscles weakness.

Some previously reported cases had too long interval from the final injection of BTX-A to the onset of neuropathy [3,8,9]. Based on three studies with valid methodology, the annual incidence of facial nerve palsy was estimated in the range of 25 to 100 per 100,000 [10-12]. The estimated incidence in Japan appeared to be similar to that in the US, based on the available literature [13]. Recognizing the long duration to the onset of neuropathy and the incidence of facial nerve palsy, it is difficult to establish whether BTX-A played some role in facial nerve palsy or the palsy occurred as a coincidence in these cases.

On the other hand, the other cases and our case developed neuropathy within almost 2 weeks after BTX-A injection [4-7]. BTX-A binds to GT1b and GQ1b with high affinity and induces the clinical features similar to Guillain-Barré syndrome [2,14]. Therefore, BTX-A might contribute to the onset of neuropathy in the latter cases.

We thank Dr. Mitchell F Brin (University of California, Irvine, US) for his advice to this case.