The diagnostic criteria of chronic inflammatory demyelinating polyradiculoneuropathy (CIDP) are based on clinical findings and auxiliary investigations, of which the most important ones are neurophysiological findings. Since the European Federation of Neurological Societies/ Peripheral Nerve Society (EFNS/PNS) incorporated distal CMAP duration into the neurophysiological diagnostic criteria, their sensitivity increased to 81.3% and specificity to 96.2%. We describe a case of a 58-year-old man who was referred to our electromyography (EMG) laboratory for a second opinion regarding his diagnosis. The patient exhibited sensory-motor polyneuropathy with prominent hypotrophy of the calf muscles. Electrodiagnostic testing prior to admission had revealed a probable axonal neuropathy. In our EMG laboratory, we accomplished nerve conduction studies (NCS) of both hands and legs and we noted a prominent increase of distal CMAP duration, whereas distal motor latencies (DML) were within normal limits. As the CMAP amplitude in the tibial and peroneal nerves was less than 1 millivolt (mV), the existence of myelinopathy could not be inferred from any other parameters identified in the lower extremities. Neurophysiological investigation of both hands was necessary, even though the clinical picture of polyneuropathy was substantially more prominent in the legs. It is important to distinguish between axonal and myelin sheath lesions in order to understand the pathogenetic aspects of neuropathy. In addition, treatment of demyelinating autoimmune neuropathies can be offered and it is effective. In our patient, distal CMAP duration was the main discriminating parameter among the various neurophysiological parameters of the CIDP diagnostic criteria.

The diagnostic criteria of CIDP are based on clinical findings and auxiliary investigations. The ones of greatest importance are the neurophysiological criteria, originally determined by the American Academy of Neurology (AAN) and later, in 2010, by the EFNS/PNS. The earlier established parameters included motor conduction velocity, distal latency prolongation, F-wave latency prolongation, conduction block, and temporal dispersion. The EFNS/PNS added a new parameter - distal CMAP duration. A multicentre study established a sensitivity level of only 63% and a specificity of 99.3% for the AAN criteria, whereas sensitivity and specificity levels of 81.3% and 96.2%, respectively, were reached for the EFNS/PNS criteria [1]. Prolonged distal CMAP duration is of high importance; a value equal to or greater than 9 milliseconds (ms) in only one of four nerves distinguishes CIDP from other neuropathies with a sensitivity of 0.78 and specificity of 0.94 [2].

We describe a patient with a one-year history of paraesthesia and weakness in all 4 limbs, whose prolonged distal CMAP duration was the decisive parameter for the diagnosis of CIDP.

We describe a case of a 58-year-old man with hypertension who had undergone aortic valve replacement, necessitating long-term anticoagulant therapy; he had been engaging in sports. He has absolved ground school; he is a postman and driver of postal car. He is non- smoker and only exceptionally drinks a glass or two of beer. The patient initially presented with a one-year history of paraesthesia and hypaesthesia of the feet and hands along with hypotrophy of small muscles of the feet and calves. There were decreased reflexes C7, C8 and L2-4 and non-elicitable reflexes L5-S2. Mild hypaesthesia on the distal phalangs of all fingers with clumsy pinch and difficulties with skilled movements (buttoning). We have found hypaesthesia distally of patella with loss of vibration sense on feet. He was able to squat down only with the help of arms and standing on one leg disclosed pelvis instability. Nonetheless, he was still able to walk on his toes and heels.

The patient was referred for a second opinion regarding his diagnosis of distal sensory-motor polyneuropathy of axonal type. Electrodiagnostic testing prior to admission had revealed very low CMAP amplitude in the lower extremities, and mild slowing of motor conduction velocities (MCV) and sensory conduction velocities (SCV). By means of a needle EMG, a severe chronic denervation syndrome in the muscles of the lower legs had been ascertained.

In our EMG laboratory, we performed nerve conduction studies (NCS) of both hands and legs, which showed a prominent increase of distal CMAP duration, whereas distal motor latencies (DML) were within normal limits. Sensory nerve action potentials (SNAP) in the lower and upper extremities were acquired; however, low amplitude and low sensory conduction velocity (25-35 m/s) were observed (Table 1), (Figures 1-3). 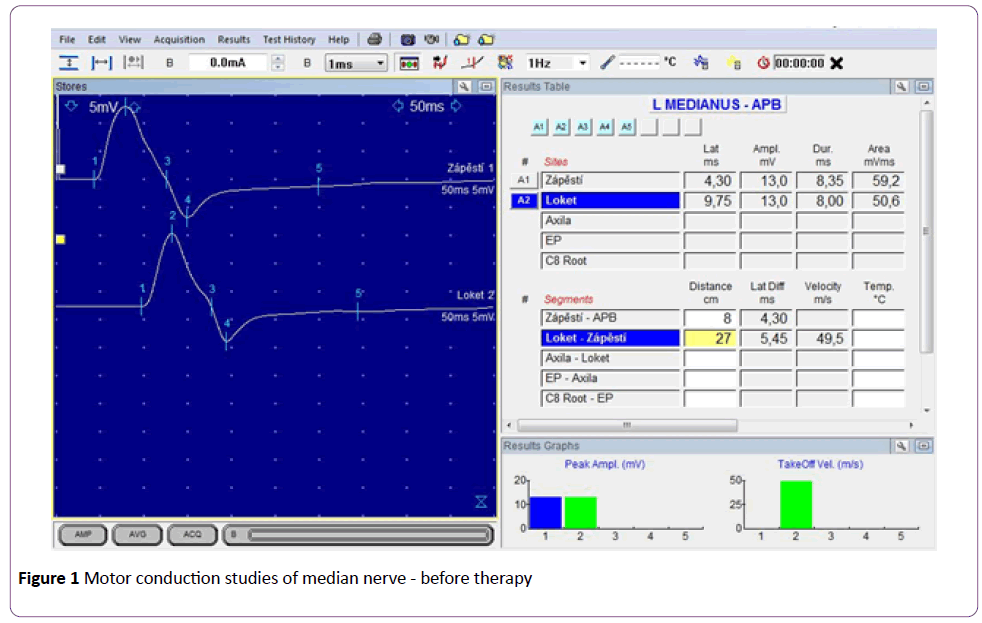 Lumbar puncture findings were normal, antibodies against gangliosides were not detected, and oncological screening was negative.

Based on the neurophysiological findings we concluded that the EFNS/PNS criteria for the diagnosis of CIDP were fulfilled. The most important parameter was the duration of distal CMAP of the median and ulnar nerves bilaterally. Because the DML and MCV were within normal range, the demyelination changes were probably located in the distal forearms and wrists. The CMAP amplitude in the tibial and peroneal nerves was less than 1 mV; therefore, the existence of myelinopathy could not be inferred from any other parameters identified in the lower extremities.

An intravenous infusion of methylprednisolone (1 g administered 5 times) led to substantial relief of neuropathic pain and improved walking ability (Figure 4). Currently, the patient is on maintenance immunosuppression with prednisone 10 mg every other day and azathioprine 100 mg once daily.

In our patient, we found that distal CMAP duration was markedly prolonged (7.10 ms and 8.60 ms in the median nerves and 7.45 ms and 9.22 ms in the ulnar nerves). In three of the four nerves, distal CMAP duration was prolonged, yet in both hands, the DML values were within normal range. Normal DML means that there is no demyelination in the terminal motor nerves. Based on the pattern of breakdown of the blood-nerve barrier, we believe that the myelin sheath lesions were in the intermediate of nerves, from forearms to the wrists [5].

Although the clinical picture of distal sensory-motor polyneuropathy resembles that of axonal neuropathy and predominantly affects the legs, EMG investigation needs to include not only the legs but also both hands. In cases of low CMAP amplitude in the lower extremities, it is not possible to infer the diagnosis from an EMG of the legs and to distinguish axonal lesions from myelin sheath lesions. In such cases, an evaluation of distal CMAP duration of the median and ulnar nerves is the most important and the main discriminating parameter.

The authors declare that they have no financial or other conflicts of interest in relation to this research and its publication.