Background: At birth in cephalic presentation in fetuses formed a region on the skull roof – area of the periosteal blood stagnation (APS) that persists in newborns. In newborns with minimal birth trauma, in the Tentorium Cerebelli (TC) formed intradural hemorrhages, which do not lead to death. The relationship between these pathological changes has not been studied. The present study aims to examine it.

Method and findings: In a group of 53 neonates and intrapartum dead fetuses it was investigated the correlation between the location of the APS on the skull roof and localization of hemorrhages in TC, consisting of two halves. Two patterns are revealed. First, at a central location in the APS 83.3% of cases there are bilateral uniform hemorrhage in TC, and to an asymmetric, corresponding asynclitic insertion head, - unilateral hemorrhage or prevailing on one side (84%; P <0.01, Q = 0.86). Secondly, the unilateral hemorrhage (or hemorrhage, which is larger in the bilateral hemorrhage) in the TC is predominantly (95.2%) on the side opposite the direction of movement of APS, and more frequently in the left half of the vehicle.

Conclusion: The results of the study showed that the emplacement of the hemorrhage in TC of the neonates and fetuses born in cephalic presentation depends on the location of the APS.

One of the morphological manifestations of traumatic injuries of the skull (along with a caput succedaneum, epidural subaponeurotic hemorrhage and cephalohematoma) is the area of periosteal stagnation of blood of the skull roof (APS), which is formed in the birth process and has a view of a portion of the periosteum as often of round shape dark red (Figures 1 and 2). This morphological phenomenon was first described by us in 1985 [1]. The APS is an area of marked venous congestion of the periosteum of the bones of the skull roof in combination with point and spotty hemorrhages, which by nature of its location reflects the insertion of the head. APS occurs below the zone of contact of the head in the birth canal and the mother often moves to the right or left parietal bone. The APS reflects the insertion of the head, the nature and extent of asynclitic insertion head, and remains on the skull to 10 or more days. 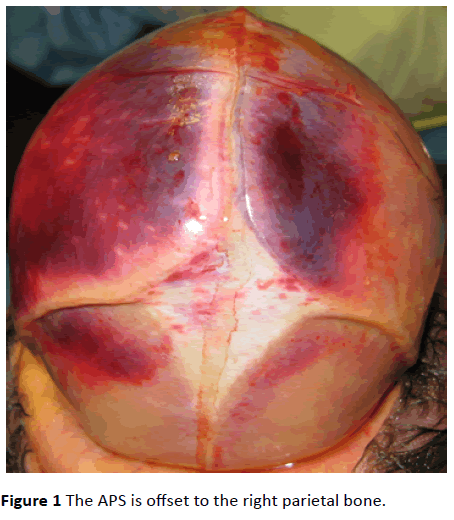 Figure 1: The APS is offset to the right parietal bone. 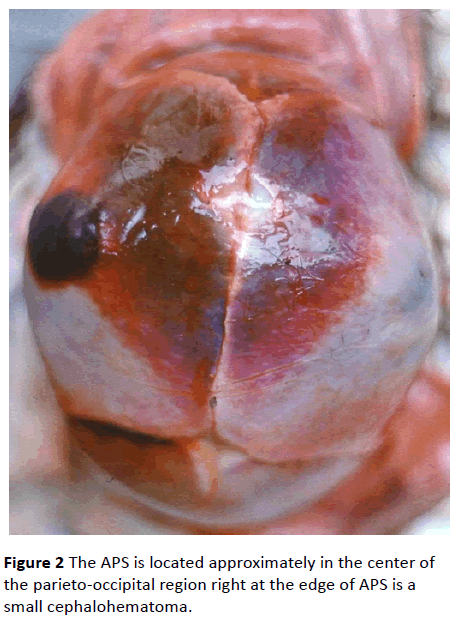 Figure 2: The APS is located approximately in the center of the parieto-occipital region right at the edge of APS is a small cephalohematoma.

In the world literature it is not pay sufficient attention to the study of injuries of the TC, which are a marker of birth injury and are important for understanding its mechanisms. There are 2 groups of TC injuries: 1) intradural hemorrhages (Figures 2 and 3) tears (ruptures). Tear TC – the main manifestation of birth trauma to the skull [2-4], is 80-85% of all fatal birth injuries [5]. In the leading modern world guidelines for pediatric pathology and pediatric neurology [5-12] there is no answer to the question, what the mechanism is of ruptures and hemorrhages in TC. There are only General data about the damage of TC in the application of obstetric forceps, vacuum extraction, and compression heads. 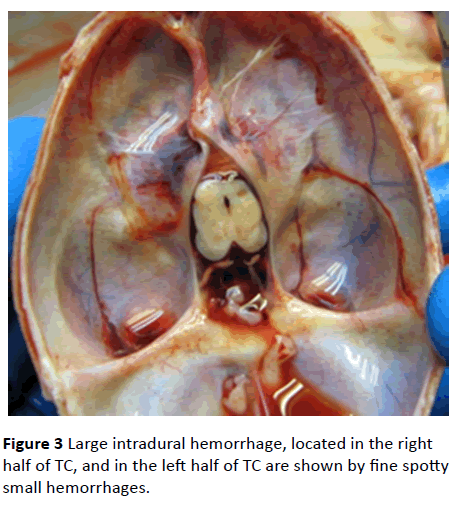 Figure 3: Large intradural hemorrhage, located in the right half of TC, and in the left half of TC are shown by fine spotty small hemorrhages.

Here it is described about the morphology of the tears and associated subdural hemorrhages. Why observed unilateral tears TC? Why the tears in TC occur more often in the left half? What is the relationship of the TC tears with the bio mechanism of labor, with the insertion of the head? What is the relationship of the tears of TC with modifications of the skull? How does asynclitic insertion head for tears of TC? No answers to these questions in previous special studies on TC in the works by birth injury [6-8,10,13]. Only in our recent studies it was able to answer these questions [2-4,14,15], which are not reflected in the English language literature. There are studies on the correlation between the location of the APS and tears of TC [3,4,14], but there are no similar studies for the research of correlations between intradural hemorrhage in TC and location APS in the literature.

The purpose of the study was to study the correlation between the position of the APS and the location of hemorrhages in TC.

From the material of its own 657 unselected perinatal autopsies it was selected newborns and intrapartum died fetuses who were born with cephalic presentation and who found a clear APS and intradural hemorrhage in TC. From this group I excluded children born cesarean section, antenatal deaths, with the presence of externally visible malformations, cases with the use of the obstetric forceps and the vacuum extractor, as well as instances of incorrect presentation of the fetus and abnormal insertion of the head (frontal, face). The result was a group of 53 children with body weight from 1200 to 4800 g was formed, born in cephalic presentation and who died in the first 8 days after birth or intrapartum (5 cases). The causes of death were birth trauma (rupture of the vein, falx cerebry, subcapsular hematoma liver with rupture, bleeding in the adrenal gland, intracranial hemorrhage; 24.5%), respiratory distress syndrome (22.6%), intraventricular hemorrhage (9.4%), congenital aspiration pneumonia (9.4%), aspiration syndrome (5.7%), intranatal hypoxia (5.7%), hemolytic disease (5.7%) etc. Measured the distance between the edges of the APS and the sagittal suture, and determined the degree of asynclitism [15]. In the TC was described the localization of hemorrhages. A comparison was made of the location of the APS and hemorrhages in TC.

All newborns and fetuses with hemorrhages in TC (53 cases) were divided into two groups-1) with the Central location of the APS (24 cases) and 2) with an asymmetric location of the APS (29 cases) – the displacement of APS was 1.5 cm and more. That is, in the 2nd group it was studied the cases with pathological asynclitic, in which the sagittal suture is deflected from the middle line plane of the entrance to the pelvis by more than 1.5 - 2 cm. The results of the study are shown in Table 1. For the statistical study used analysis of variance by the method of R. A. Fisher, and calculated correlation coefficients.

Table 1: The types of the hemorrhages in TC in groups of children with central and asymmetric location of the APS.

The investigated group of children was sufficient to obtain reliable information. When the correlation analysis and the calculation of the Association coefficient by the formula Q = (ad – bc) : (ad + bc), where the letters “a” “b” “c” “d” correspond to the value fields in Table 1, the Association coefficient is 0.86, which corresponds to a large (strong) correlation.

Thus, asynclitic of the fetal head (in cases of pathological asynclitism) leads to unilateral hemorrhage in the TC, which is understandable. During off-axis insertion of the head and the pressure from the walls of the birth canal and the promontory of the sacrum the posterior parietal bone is displaced in the direction of the sagittal suture, under the presenting parietal bone and has pressure on it, which becomes more convex, and the sagittal suture is displaced towards the Central axis of the birth canal and presenting bones. In this process falx cerebri larger stretches one of the halves of the TC on the side opposite the presenting bone. In overstretched half of TC due to violation of the outflow of blood arise venous stagnation and intradural hemorrhage. The inflow of arterial blood in violation of the venous outflow leads to the ruptures of capillaries and intradural hemorrhages. The longer the duration of tension TC and the greater the intensity of the tension, the more significant hemorrhages. These hemorrhages have spotty character, are often on the edge or in the center half of TC. Hemorrhages in TC do not lead to death, but are markers (diagnostic signs, determinants) delivery flow, the insertion head and the degree of its configuration. Regarding hemorrhage, the same regularities discovered by me, as the tears of TC [3,4,14]. Namely, unilateral haemorrhage or haemorrhage of larger sizes in bilateral hemorrhage in TC is located on the side opposite to the point, where the APS is displaced.

TC is duplicatura Dura mater, connected with the falx cerebri, which is attached to the bones of the skull. Between two sheets of dura mater in TÃÂÃÂ¡ are vessels, veins flow into the transverse and straight sinuses. Force of compression of the head, changes its configuration, and always passed through the falx cerebri on TC, which is stretched. Initially, the impaired venous blood flow from TC, there arise hemorrhages, then, when the tension force exceeds its strength, and there are tears of TC. As TÃÂÃÂ¡ strength almost two times smaller than the falx cerebri, so TÃÂÃÂ¡ damaged first. TC is a "locus minoris resistenciae" birth trauma of the skull.

The results of the study showed that the emplacement of the hemorrhage in TC of the neonates and fetuses born in cephalic presentation depends on the location of the APS on the roof of the skull, hence, the insertion head. When there is syncletic insertion of the head, there occurs predominantly unilateral hemorrhages in the TC, and more often in the left half. The revealed correlation between APS and hemorrhages in TC have a lot in common with the correlations between the APS and tears TC [4], indicating the existence of common mechanisms in the emergence as hemorrhages and tears in TC.

Author to the publication and declare that there is no conflict of interest.