Clinical presentation: A 64-year-old woman presented paraneoplastic chorea with non-typical coincidence of anti-Hu and anti-GD1b antibodies. Chorea was the last sign of the disease and was comorbid with encephalitis, chronic polyradiculoneuropathy and autonomic dysfunction; the clinical symptoms were disseminated in time. A very rare type of lung cancer i.e., poorly differentiated non-small cell neuroendocrine cancer was found.

Conclusions: The diversity of the clinical picture in this patient with non-small cell neuro-endocrine lung cancer can be explained by the complexity of the neurological pathomechanisms of paraneoplastic syndromes.

Paraneoplastic neurological syndrome (PNS) is defined as an effect of a cancer situated outside the nervous system, distant in time and space. The cancer has an influence on the nervous structure, neuromuscular junction and muscles via the secretion of different mediators, such as peptides, cytokines, hormones, and activating immunological processes [1-3]. Nonsmall cell neuro-endocrine lung cancer is very rare (2-3% of all lung cancers) [4]. The authors present a complex case of PNS, among them chorea, as a first manifestation of this type of lung cancer.

The 64-year-old woman had a complex medical history: hypertension, lipid disorders, bronchial asthma and depressive syndrome. The case history lasted from January 2012 to July 2013. She complained of visual disturbances in the form of image "merging", periodic double vision, and right hemihypoesthesia. She had an ophthalmoplegia with limited upward gazing, horizontal nystagmus, discrete right hemiparesis and hemihypoesthesia, and a lack of ankle reflexes. MR T2-weighted images showed a hyperintense lesion in the dorsal mesencephalon and pons. The inflammation of the brain was taken into consideration (Figure 1A). Cerebrospinal fluid was normal. EEG revealed a small asymmetry of alpha wave amplitude (higher on the right side). The patient received antiviral agents and oral steroids with improvement. The control MRs showed a partial regression of the dorsal mesencephalon lesion (Figure 1B).

In June 2012, she was again hospitalized because of progressive paresthesia of her lower limbs, and additionally severe constipation. An abdominal USG showed right adrenal incidentaloma. In the neurological examination slight, right hemiparesis, flaccid paraparesis of the lower limbs with a distal hypoesthesia were seen.

Neurographic studies revealed bilateral axonal damage of the peroneal nerves with F-wave latency prolongation, segmental demyelination in the proximal part of the right peroneal nerve. The protein level in CSF was slightly elevated (53 mg/dl). A non-typical form of polyradiculoneuropathy with central nervous system impairment was recognized. The patient was treated with steroids again together with Acidum Folicum, and vitamins.

In November 2012, lower limb weakness was enhanced, with gait and balance problems. Distal sensation impairment, and all limbs sensory ataxia were seen. The subsequent MR examination revealed the same changes as previously, and additionally high intensity signal in T1 and T2-weighted images in the basal ganglia region, especially the putamen (Figure 1C), vascular changes in the white matter of both hemispheres. Progression of nerve damage with a muscle’s denervation process were seen.

In January 2013, choreic movements of her head, trunk and four limbs appeared together with severe diarrhea. The nonspecific inflammatory process in the mesencephalon, basal ganglia, and thalamus was seen in MRI (Figure 1D). Further progression was noted in electroneurographic studies. The anti-Hu and anti-GD1b antibodies in IgM class were detected. The Ro-52 antibody, inflammation markers and Wassermann reaction were positive. A chest CT, performed due to dyspnoe and hemoptysis, revealed a tumor in the left pulmonary hilus (Figure 2). Poorly differentiated non-small cell neuroendocrine cancer of the left lung was diagnosed. Sandostatin was used in the patient’s treatment without improvement. The patient died in July 2013. 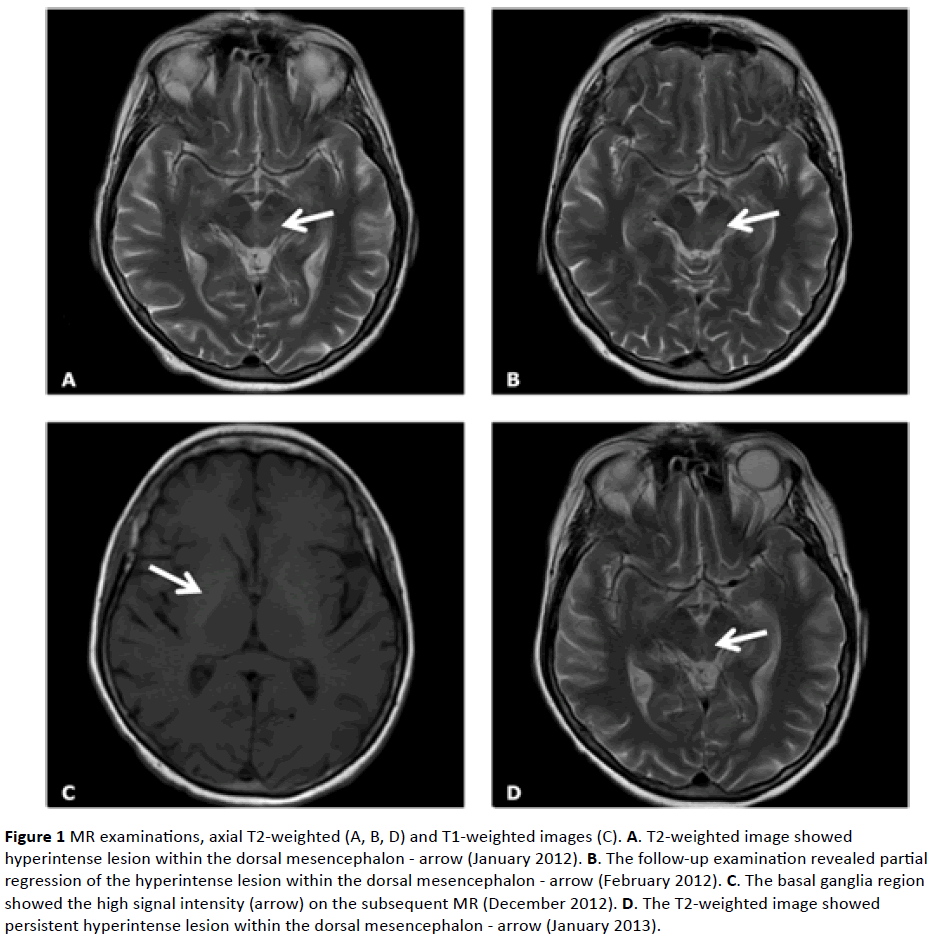 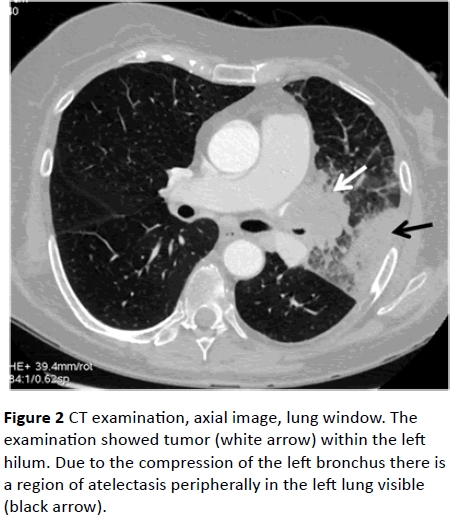 Figure 2: CT examination, axial image, lung window. The examination showed tumor (white arrow) within the left hilum. Due to the compression of the left bronchus there is a region of atelectasis peripherally in the left lung visible (black arrow).

Excititoxicity, oxidative stress and inflammatory reaction induced by cytokines underlie PNS. The activation of the immune and hormonal system is noted. Each of these processes can lead to disturbances in the bioelectric activity of the nervous system, and neuronal cell death caused by apoptosis [5,6]. The pathophysiological role of onconeuronal antibodies in PNS is not unequivocally established. Cellmediated immunity is also thought to play an important role. Lymphocytes could react with the same antigens as onconeuronal antibodies [7].

Paraneoplastic basal ganglia disorders have an exceptionally rare occurrence. Chorea is mainly associated with the CRMP-5/CV2 antibody. In Yu Z. et al. [9] study, paraneoplastic chorea occurred in 11% of patients with lung cancer and positive CRMP-5/CV2, coexisting with peripheral neuropathy in 47% of patients, and autonomic disorder in 31%. Vernino S. et al. [10] described 16 patients with paraneoplastic chorea mainly in the course of small-cell lung cancer, with CRMP-5, and anti-Hu antibodies. Our patient had a different panel of antibodies: anti-Hu and anti-GD1b. The type of cancer was also atypical: poorly differentiated non-small cell neuroendocrine lung cancer. In the presented case, chorea was connected with encephalitis, chronic polyradiculoneuropathy, and autonomic symptoms (constipation/diarrhea). The course of the disease was disseminated in space and time.

The diversity of the clinical picture, disseminated in space and time, in our patient with non-small cell neuro-endocrine lung cancer can be explained by the complexity of the neurological pathomechanisms of paraneoplastic syndromes.

There are no acknowledgments.