Cerebral Salt Wasting due to Bilateral Hypothamic Lesions as a Presentation of NMOSD: A Case Illustration and Retrospective Review of Local Occurrence

Citation: Abdullah S (2021) Cerebral Salt Wasting due to Bilateral Hypothamic Lesions as a Presentation of NMOSD: A Case Illustration and Retrospective Review of Local Occurrence. J Neurol Neurosci Vol.12 No.9:391.

Hyponatremia as a complication associated with neurological condition is not uncommon. Syndrome of Inappropriate Anti-Diuretic Hormone (SIADH) has been reported with (CSW increasing frequency in association with Neuromyelitis Optica Spectrum Disorder (NMOSD). Nevertheless, Cerebral Salt Wasting) is less recognized especially as the initial presentation of sero-positive NMOSD.

Objective: 1. To report a case of CSW due to bilateral hypothalamic lesions as a clinical presentation of NMOSD; 2. To review the frequency and the cause of hyponatremia in our cohort of NMOSD patients.

Methods: We illustrated a case of NMOSD presented with CSW. This was followed by a retrospective review of our Electronic Medical Records (EMR) of 86 patients with NMOSD from 2005 to 2020 who presented with persistent hyponatremia. The clinical, biochemical and radiological data were gathered and analyzed.

Results: 10/85 (11.8%) patients had persistent hyponatremia needing medical intervention. Only 3 had gastro-intestinal symptom, 5 had transverse myelitis, 1 had general malaise, and 1 had optic neuritis. One patient had new brain lesion involving the area post rema. Two patients were diagnosed as SIADH and 1 was diagnosed as CSW.

Conclusion: Even though SIADH is a more recognizable cause of hyponatremia in NMOSD, CSW need to be considered as a differential diagnosis. This case presentation highlighted the diversity in the clinical presentation of NMOSD.

A 63-year-old woman presented to our hospital with a vague complaint of giddiness and generalized malaise. There was no history of vomiting or diarrhea. However, her serum sodium was documented as 117 mmol/L with a further drop to 109 mmol/L upon repetition. Clinical examination revealed a lethargic but otherwise alert patient without any focal neurological deficit. Despite a good skin turgor, her serum hematocrit was elevated at a value of 0.43 L/L (baseline 0.36-0.37 L/L). Other laboratory tests revealed the followings: Serum osmolarity 244 mmol/kg (reference 275-295 mmol/kg), urine osmolarity 842 mmol/kg (reference 50-1200 mmol/kg), urine: serum osmolality ratio 3.45 (reference >1.0), urine sodium 52 mmol/L (reference 40-220 mmol/L), serum urea 4.2 mmol/L (reference 3.2-8.2 mmol/L), serum creatinine 45 μmol/L (reference 44-71 μmol/L), serum cortisol taken at 8 AM 613 nmol/L (reference 145-619 nmol/L) and thyroid function test was within normal limits. MRI of the brain showed a new non-enhancing T2/FLAIR hyper-intensity involving both hypothalamic regions (Figure 1). She was initially diagnosed by the Endocrinologist with Syndrome of inappropriate anti-diuretic hormone (SIADH) and treated with fluid restriction, which resulted in worsening hyponatremia. Upon initiation of intravenous Normal saline infusion and supplementation, a steady improvement of serum sodium level was noted. Her final diagnosis was hyponatremia secondary to cerebral salt wasting (CSW). Her serum sodium level upon discharge was 138mmol/ L (Figure 2). Her serum anti AQP4 antibody was positive and she was diagnosed with NMOSD. 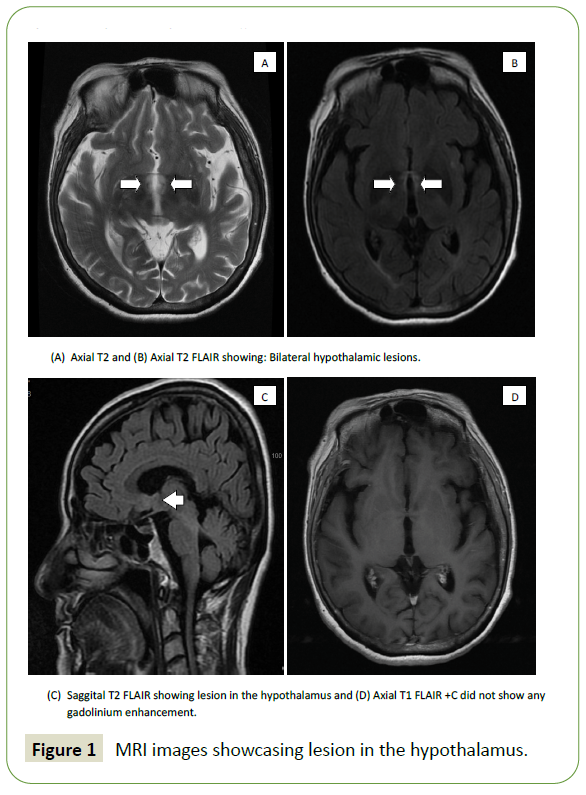 We retrospectively reviewed the electronic medical records of the remaining 85 patients with NMOSD (AQP4 positive, n=84; AQP4 negative, n=1) to look for patient with history of persistently moderate hyponatremia needing admission to our Neurology ward from 2005 to 2020 (Table 1). In total, there were 10 (11.8%) patients who fulfilled the criteria. Only 3 patients presented with symptom of gastro-intestinal loss. Others were admitted for transverse myelitis (n=5), general malaise (n=1), and optic neuritis (n=1). Eight patients had accompanying MRI done during their admission. Only one patient had new brain lesion involving the area post-rema. Two patients were diagnosed as SIADH and 1 was diagnosed as CSW. Three were diagnosed as drug induced hyponatremia (Carbamazepine n=2, Gabapentin n=1), 2 with gastro-intestinal illness (Gastroenteritis n= 1, Chron’s disease n= 1), 1 with primary polydypsia and 1 with area post rema syndrome (APRS).

Over the last decades, there has been increasing awareness in the association of hyponatremia with NMOSD. Even though initial association was related to gastro-intestinal loss in ARPS, symptomatic hypothalamic lesions presented with SIADH have been reported with increasing frequency, ranging from 14.6% to 16.0% [1,2]. The proposed pathophysiology was a direct injury to the pituitary-hypothalamic axis caused by AQP4 antibody induced astrocyte cytotoxicity, resulting in the leakage of anti-diuretic hormone (ADH) [3,4]. In contrast to dilutional hyponatremia caused by SIADH, depletional hyponatremia caused by CSW has been rarely reported in NMOSD. Nevertheless the distinction between these two diagnoses is essential as it affects the approach to treatment.

Recognition of CSW as a separate entity from SIADH came to light in the early 21st century. A retrospective study by Sherlock M, et al. [5] in 2006 involving a cohort of 316 patients presented with hyponatremia secondary to Subarachnoid Hemorrhage (SAH) revealed that 69% was due to SIADH and another 6.5% was due to CSW [5]. Differentiating between these two diagnoses could be difficult as they posed a significant overlap in their clinical and biochemistry profiles. Both conditions display low serum osmolality, elevated urine osmolality and urine sodium level, with otherwise normal renal, thyroid and adrenal function. Even though the extracellular volume status was the differentiating factor, i.e. euvolumic/hypervolumic in SIADH vs. hypovolumic in CSW, clinically the difference is not always apparent. Nevertheless, response to fluid therapy offers the best distinction. Intravenous fluid infusion with sodium replacement improves hyponatremia in CSW but worsen the serum sodium level in SIADH. Similarly, restriction of fluid increases the sodium level in SIADH but not in CSW [6,7].

The pathophysiology behind CSW is still poorly understood. The two current theories involved the inhibition of the reninaldosterone- angiotensin system by the released of Brain Natriuretic Peptide (BNF) and dysfunction of the sympathetic neural input to the kidney. Injury to the hypothalamus resulted in the release of BNP into the systemic circulation that acted on the renal collecting system causing inhibition of sodium reabsorption and release of renin. Similarly, injury to the hypothalamus depresses the sympathetic input to the kidney. Hence reduces sodium reabsorption and the level of renin and aldosterone in the circulation [7,8].

Our patient presented with minimally symptomatic CSW associated with bilateral hypothalamic lesions as a presentation of sero-positive NMOSD. The patient was alert and coherent despite a serum sodium level of 117 mmol/L. There was no history of gastro-intestinal loss or drug use that could explain the loss of sodium. Despite bilateral hypothalamus involvement, there was no history or clinical finding to suggest progressive hypersomnolence. Initially treated as SIADH, there was worsening of hyponatremia with fluid restriction followed by subsequent improvement with normal saline infusion. Even though patient was not clinically dry, her hematrocit was elevated at 0.43 L/L which was 0.07 L/L higher than her normal baseline recorded in her previous admission. Her biochemistry response to hydration rather than fluid restriction supported the diagnosis of CSW rather than SIADH. To the best of our knowledge, this is the first case of CSW in NMOSD who presented with severe hyponatremia associated with bilateral hypothalamic lesion without any history of gastro-intestinal lost [9,10].

In summary, hyponatremia in association with NMOSD is not uncommon. The abundance of the AQP4 water channels in the ependymal system as the target antibody in the pathophysiology of NMOSD resulted in frequent involvement of the hypothalamus.

Even though SIADH is a more recognizable cause of hyponatremia in NMOSD, CSW need to be considered as a differential diagnosis as it will affect the direction of treatment approach. This case presentation highlighted the diversity in the clinical presentation of NMOSD.